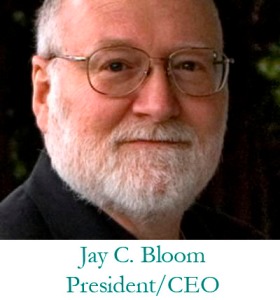 Since 1983, Jay C. Bloom has been providing executive and personal coaching to leaders, managers, and individuals in the private, philanthropic, and governmental sectors who are experiencing a transition in their lives or desiring to strengthen their professional skills and capabilities. Jay also provides leadership and management consultation with organizations that are undergoing transitions with a special expertise in helping them develop effective collaborations and partnerships. He has been described as a social entrepreneur stimulating change not only for individuals and organizations but for communities as well.

Jay is passionately promoting his concept of “returnment,” a term he created for aging boomers as an alternative to retirement. Returnment encourages older adults to spend their later years using their skills, resources, and knowledge to benefit the greater good. He’s also assisting organizations locally and nationally in finding ways to more effectively utilize this growing new resource. His recent article “ Experience Making a Difference: the Secrets of Working Effectively in the Social Sector” contains a number of useful insights for those thinking of working and volunteering in the social sector.

Jay was recently honored by SAGE (Seniors Advocating for Generational Equity) with their individual award for community leadership. (Program begins at 22:04.)

Jay served in 2011 for the second time as interim President/CEO of United Way of Columbia-Willamette for ten months and helped raise the most dollars ever in this United Way’s history up to that point. He also served in that role for seven months in 2008.

Jay launched a new initiative in Honolulu titled KupunaWork through Kapiolani Community College’s Kupuna Education Center, which focused on assisting older adults explore opportunities for meaningful engagement in their later years. He also recently worked as a sustainability consultant with the State of Hawaii Executive Office on Aging and the statewide Healthy Aging partnership to further embed evidenced based health promotion and disease prevention programs throughout the four counties of Hawaii.

Jay served as the director of the innovative Task Force on Vital Aging sponsored by then Multnomah County Chair Ted Wheeler in Portland, Oregon. The task force researched best practices for employing and civically engaging older adults and completed a report in March 2008.

Prior to that Jay served for 13 years as President/CEO of Morrison Child and Family Services, a $22 million nonprofit organization that annually serves more than 5,000 children, youth and their families throughout Oregon and Washington and earlier served as a director of nonprofit organizations in Connecticut and Massachusetts for 18 years.

Jay has undergraduate and graduate degrees in psychology and has attended executive management programs at Yale and Harvard Universities. He has lectured at a number of colleges and universities in graduate and undergraduate departments of business, social work, nonprofit management and psychology, including: Connecticut College; University of Connecticut; University of Portland; Reed College; Portland State University; Lewis and Clark College and has also presented at numerous professional conferences.

Jay currently serves on the Board of Directors of InTRUSTment Northwest and the Governor’s Commission on Senior Services.  He is also on the advisory committees of Portland State University’s Age Friendly City initiative, and School of Social Work, Encore Fellows and Villages NW. He recently served on the boards of EngAGE NW, Wisdom of the Elders, Children’s Trust Fund of Oregon, Bridge Meadows, Elders in Action, Children First for Oregon and the Oregon Gerontology Association. He was the founding chair of the Leadership Council of Life by Design Northwest and the founding co chair of the Nonprofit Association of Oregon. He also served as a member of the City and County of Honolulu Committee on Aging.

Jay is a firm believer that unless you are engaged in your later years you are just dying longer not living longer. Jay works tirelessly promoting intergenerational interdependence and intergenerational equity and believes in building a State and community for all ages.

Here is a link to a wonderful video on “how to age gracefully” at all ages and stages of life.